The development of biomechanical stimulation treatment was based on a continuous clinical study and both scientific and academic research about the vital functions of the Extra-Cellular Matrix (ECM) and its relationship to the physiological rhythmic vibrations of human muscle.

Biomechanical stimulation therapy is a non-invasive, mechanotherapy treatment that improves the mobility of joints, enhances skeletal muscle repair and promotes the regeneration of injured muscles within the musculoskeletal (MSK) system. It targets the area which surrounds the cell and is responsible for both the nutrient supply to and waste disposal from the cell. The aim of biomechanical stimulation treatment is to restore healthy and vital muscles, fascia and tendons in the affected tissues. BMS treatment is especially effective in regard to musculoskeletal complaints. In addition to manually-performed lymph drainage, osteopathy, chiropractic, atlas therapy, shockwave and other conventional therapies, BMS has an immediate effect on the musculoskeletal condition and pain relief. BMS addresses the Extra-Cellular Matrix (ECM) between the capillaries and the cells themselves. It acts specifically on the metabolic dynamics in the extracellular matrix.  BMS distinguishes itself from many therapeutic measures in physiotherapy, and differs from many conventional vibration applications which are often vertical to the musculature on the tissue and work with frequencies in a range far beyond the upper biological frequency limit of 30 Hz. The muscular rhythm is imitated from the outside through biomechanical stimulation (BMS) along the longitudinal fibres of the muscle. The mechanical stimulation replicates the biological vibration patterns of the muscles. The biological frequency window of 8 Hz to 30 Hz and the amplitude windows of 0.1 to 5 mm must be adhered to. Therapist works with biomechanical stimulation (BMS) with rhythm, microcirculation and metabolism – the physiological building blocks of regeneration.

In combination with manually performed lymph drainage, osteopathy, chiropractic, atlas, shockwave and other conventional therapies, BMS has an immediate effect on the musculoskeletal condition and on pain relief.

What is biomechanical stimulation?

The aim of biomechanical stimulation treatment is to restore healthy and vital muscles, fascia and tendons in the affected tissues.

The muscular rhythm can be imitated from the outside through biomechanical stimulation (BMS) along the longitudinal muscle fibres. As is known of energetically open systems (Prigogine 1987), the natural frequency of a vibrational system (muscles) adjusts to the vibration of an external pathogen or assumes its rhythm. The muscular rhythm can be imitated and stimulated externally by an appropriate vibration entry. This mechanical stimulation must be related to the biological vibration patterns of the muscles. A biological frequency window of 8 Hz to 30 Hz and an amplitude window of 0.1 to 5 mm must be adhered to. The vibration input occurs in the longitudinal direction of the musculature. Physiotherapists work with biomechanical stimulation (BMS) with rhythm, microcirculation and metabolism – the physiological building blocks of regeneration. BMS distinguishes itself from many therapeutic measures in physiotherapy which are based on the simple stimulus-reaction principle. It also differs from many conventional vibration applications which are often applied vertical to the musculature on the tissue and work with frequencies in a range far greater than the upper biological frequency limit of 30 Hz.

Since the 19th century, physicians around the world have used different forms of vibration or muscle stimulators.  In recent years, rehabilitation programmes and various physiotherapists have begun to realize – and focus on – the biological value of physiological processes which take place within an organism. Diverse levels of energy, electricity, charge, pressure and traction forces regulate the preferential absorption, amplification, modulation, transformation, and transmission of different wavelengths. Pressure and traction forces are correlated with specific rhythms of frequency patterns. Biomechanical stimulation goes beyond the traditional sense of micro-vibrations that are produced by skeletal muscles and transmitted to the surrounding tissue.

For example, if suffering from a cold. during weight lifting or experiencing a chill feeling prior to getting a fever, the micro vibration through our muscle contraction reacts at a higher frequency and amplitude with the tremor shown as a sign of activation in microcirculation system. Stimulation of the microcirculation in the Extra-Cellular Matrix space (ECM) is performed by the mechanical input and external stimulation between the venous and lymphatic capillaries. Because of the contraction along the muscle fibres, compression of the capillary leads to subsequent elastic restoration. The specific pressure and suction effect activates the microcirculation. Therefore, metabolic end products, toxins or cell decay products can be disposed of. These muscle-driven microcirculations also provide an intact and permeable rhythm to the ECM, ensuring the supply to all cells in the tissue. The biomechanical stimulation matrix therapy is now wildly practised in physiotherapy and sports medicine. 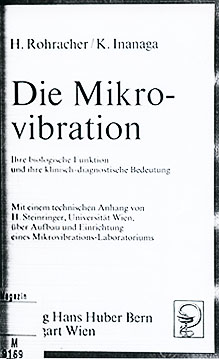 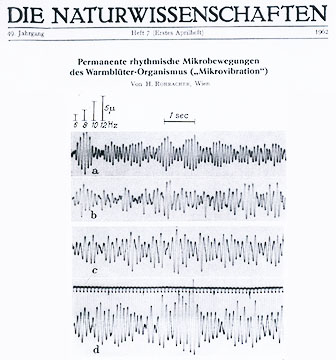 Prof. Biermann developed the first BMS device and applied it in sport science, to gymnasts, wrestlers and weightlifters in Eastern Germany during the DDR era. BMS devices increased an athlete’s performance, promoted regeneration and improved extensibility.

Later still, a German sports scientist Siegfried Hofmann encountered the BMS concept during a different sports event and developed the first device in West Germany. He also created a special form of the oscillating head (resonator) in the form of an Archimedean spiral.

Many doctors have conducted further clinical studies and have been very successful in the practical application of biomechanical stimulation:

But there were also fundamentalist scholars like Pischinger and Hartmut Heine who laid the foundations for BMS with their work on the regulation of the cell milieu system and the importance and function of the ECM.

The physiological aspects and the relationship of biomechanical stimulation to the anatomy of the Extra-Cellular Matrix space.

The mechanical stimulation regulates the micro area around the cells, so that health, wellbeing and performance are restored in the macro area. The goal of BMS matrix therapy is to optimise the long-term health of the body, rather than masking a problem or achieving only a temporarily improved state. This innovative physiotherapeutic method aims at the optimisation of metabolic pathways on the cellular level. It should have an immediate effect on the musculoskeletal condition. Biomechanical stimulation (BMS) acts specifically on the metabolic dynamics in the extracellular matrix. In the field of rehabilitation BMS therapy is especially effective in relation to musculoskeletal complaints. BMS therapy underlines the active principle of natural muscle vibration.

Regeneration through rhythm of muscles 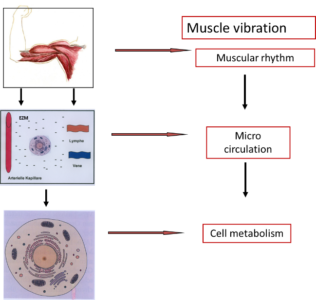 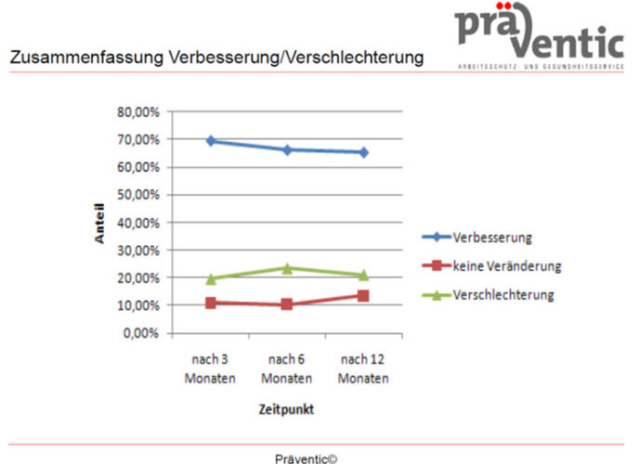 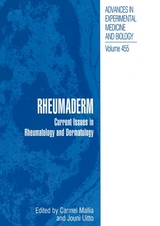 To improve the mobility of joints, particularly of the finger joints and the mandibular joint, and to reduce the edema of the skin, various physical therapies have to be used in patients with SSc. As the quality of patients’ life depends on the use of their fingers and of their mouth, these therapeutics belong to the basic measures in the treatment of SSc. In addition to the manually performed lymph drainage a new method\ the biomechanical stimulation therapy, has proven to be efficacious to improve the mobility of the joints and to reduce the edema in SSc-patients. By devices of various size, longitudinal vibrations are transduced to patients’ body: finger, hand, face, mandibular joint, the oral mucosa, the legs and the trunk. In 6 patients we found: significant (p<O.05) increase of skin score, grip strength, mobility of joints (10-30%). No side effects were observed. We conclude from these data, that skin, mucosa, joints and patients’ quality of life are improved by the biomechanical stimulation therapy in a clinical relevant degree.

Extrazell is committed to a balanced sport medicine science approach that integrates all elements. Simply investing in one area is not enough. In order to establish a robust sports medicine science capability, we must commit to a holistically balanced approach. Extra-Cellular Matrix, matrix therapy and related subjects are evolving areas thanks to the increasing experience of physicians, medical education, clinical research and administration. This is apparent not only in science but also in treatment, exercise and physical activity supporting general healthcare. The structural dynamics of fasciae and muscles, the ground substance, and the biochemistry of the Extra-Cellular Matrix and its dynamic signalling and communicative behaviour within our body need further research by practitioners and researchers. As teams continue to look for innovative ways to gain a competitive edge, sports medicine science has emerged as the next frontier of significant value creation. In the past, practitioner and scientists have leaned heavily on qualitative analysis to answer questions related to Extracellular Matrix study globally.

The rough structure of the living matrix is the extra-cellular matrix (ECM) as ahistological fact. The ECM is of an extremely high importance in biological medicine. Not only do es most interactions between regulation systems take place in the extra-cellular matrix, also the presence or storage of homotoxins at that stage might induce all kind of dysregulations and pathologies, even intra cellular. Therefore a short study of the histology and physiology of the ECM is needed first to understand the importance and depth of impact of the living matrix on the human’s health and disease.+ 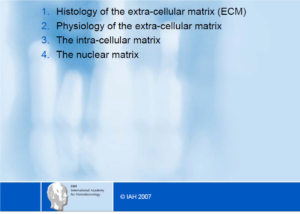 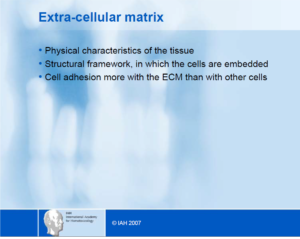 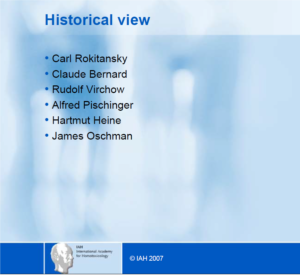 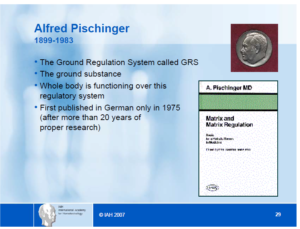 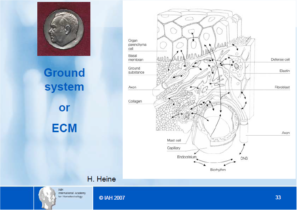 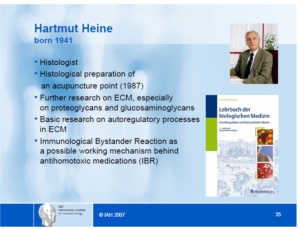 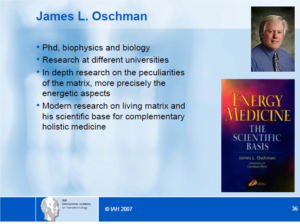 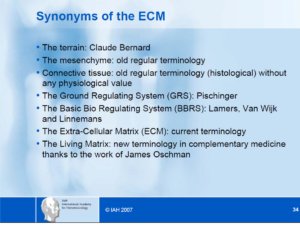 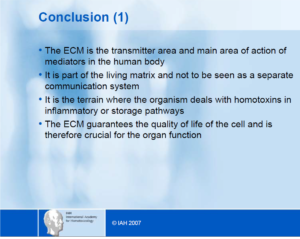 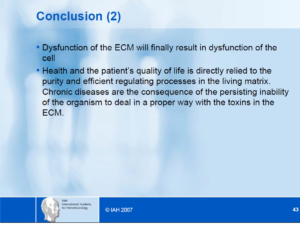